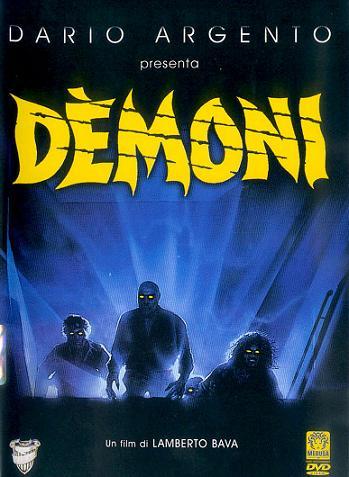 "They will make cemeteries their cathedrals, and the cities will be your tombs."
— Tagline
Advertisement:

Dèmoni, known as Demons internationally, is a 1985 horror film produced by Dario Argento, and directed by Lamberto Bava, son of Mario.

Kathy and Cheryl have received free tickets to a new horror movie. Once inside, though, what happens on the screen starts to happen in the theater, after a fellow theater-goer cuts her face on a ceremonial mask on display in the lobby, and before they know it, the cinema is over-run with man-eating demons.

The film gained a sequel, Dèmoni 2, in 1986. There's also several films that got the name Demons slapped on them even though they nothing to do with the original two.