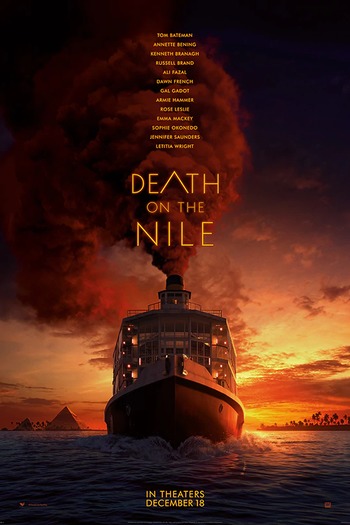 Murder was just the beginning.
"The romance of the desert has the power to seduce. I ask you, have you ever loved so much, been so possessed by jealousy, that you might kill?"
— Hercule Poirot

Death on the Nile is an upcoming American mystery thriller adapting the Agatha Christie novel of the same name. It is directed once again by Kenneth Branagh following 2017's Murder on the Orient Express, starring him once again as the Great Detective Hercule Poirot, with a screenplay by Michael Green. It is the third screen adaptation of Christie's novel, following the 1978 film starring Peter Ustinov and the 2004 episode of Poirot (with David Suchet). It was due to release on October 9, 2020 but has since been delayed to February 11, 2022 (due to the COVID-19 Pandemic).

Hercule Poirot is tasked with finding a murderer whilst on a holiday cruise on the Nile river in Egypt. He soon discovers that the murder links up to a mysterious love triangle.

Death on the Nile contains examples of:

"How many great stories are tragedies?"