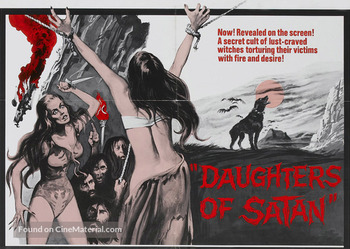 Daughters of Satan is an American B-Movie filmed—and, rarely, actually set—in the Philippines around the early 1970s, coming out in 1972. A campy, over-the-top, Gothic Horror Exploitation Film, it's primarily known for being the vehicle of a then-unknown Tom Selleck (his iconic moustache already making an appearance however). It also stars several veterans of Filipino cinema, for instance, Paraluman, a locally famous mestiza (mixed-race) leading lady from The '50s.

Tom Selleck stars as art collector James "Jim" Robertson, on assignment in Manila to complete a collection for his employers in New York, when he stumbles upon a strange painting of a witch-burning, whose central model bears an eerie resemblance to his wife Chris (Barra Grant). Thinking it would make for an interesting conversation piece, he buys it, but understandably she's freaked out. Then Doppelgangers of the other represented characters show up in quick succession: a housekeeper applies to their home who resembles one of the other witches in the painting, then a black dog arrives who's also represented in it, and then Jim's psychiatrist friend turns out to have a patient who resembles the third witch. And all that's just the beginning of all the strangeness …

The movie can be found here, for free, online.