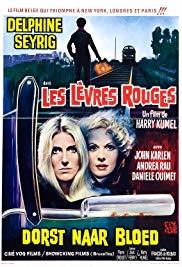 These are the Daughters of Darkness... They are waiting for you - They thrive on BLOOD
Advertisement:

Daughters of Darkness is a 1971 Belgian horror film directed by Harry Kümel.

Stefan and Valerie are a married couple who visit a seaside hotel. At the same time, alluring, mysterious French countess Elizabeth Báthory (Delphine Seyrig) and her sexy young assistant Ilona arrive. The couple bond with the countess, who tries to seduce Valerie while manipulating the both of them. Meanwhile, virgins in the nearby town are turning up dead, and Bathory is the culprit. What ensues is a tragedy of madness and sadism that can only end in doom.

It has been distributed in the US by Anchor Bay Entertainment and Blue Underground.