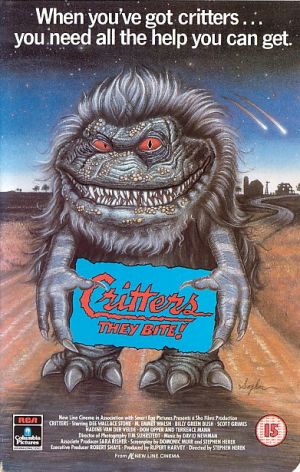 "Yeeuch. Where do they come up with this stuff?"
— Raphael, after having watched the first Critters movie. note Both Critters and the 90s Ninja Turtles were released by New Line Cinema.
Advertisement:

Critters is a film series featuring a group of deadly little furry aliens with several rows of teeth known as "Crites". The first film, directed by Stephen Herek, was released in 1986. In it, the title creatures terrorize a farm, with a pair of alien bounty hunters on their trail. It Starred a young Scott Grimes; also starring: Dee Wallace, M. Emmet Walsh, Ethan Phillips, Billy Zane, Don Keith Opper, and Terrence Mann. The latter two would appear in all of the films.

The second film was released in 1988, featuring the return of Scott Grimes as Bradley Brown (the main character from the first film). The terror starts when the creature's eggs are mistaken for Easter eggs; they quickly multiply after they hatch.

The third film, starring Leonardo DiCaprio in his film debut, begins when a family who has recently lost their mother move into an apartment, followed by the title creatures after hitching a ride in their truck.

The fourth film, starring Angela Bassett and Brad Dourif, takes place many years later in space, where they try to wipe out the remaining species of Crites.

The series is often compared to the Gremlins series, despite the script having been written before that film was released.

A short Fan Film, Critters: Bounty Hunter, was released in 2014. It's available on YouTube

On October 2018, Syfy announced they plan to reboot the series by adding sequels on their network as part of their acquisition of multiple properties such as Killer Klowns from Outer Space and Leprechaun. In 2019, an eight-episode web series titled Critters: A New Binge was made and distributed on Shudder. Later that same year, a direct-to-DVD sequel Critters Attack! was released and follows a more similar plot to Gremlins than the original films by involving a cuter Crite who turns out to be good and helps the heroes in wiping out the other Crites.