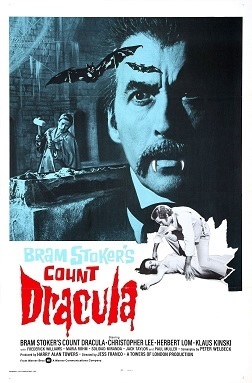 "The moon is full... the grave is empty... and terror stalks the land!"

Count Dracula is a 1970 film directed by Jess Franco and starring Christopher Lee as the titular Dracula in a non-Hammer Horror incarnation, reported to be the only incarnation of the Count Lee enjoyed portraying as he felt it was most faithful to the original.