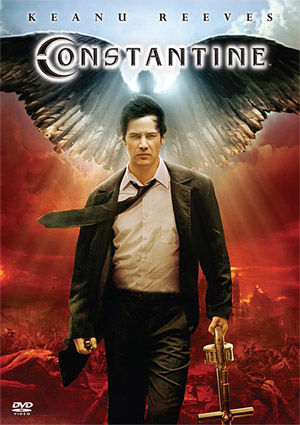 Angela: I don't believe in the devil.
John: You should. He believes in you.
Advertisement:

Constantine is a 2005 American Occult Detective film which is loosely based on Vertigo Comics' Hellblazer comic. It borrows elements from "Dangerous Habits" (John's cancer diagnosis in issues #41-46) and the "Original Sins" trade paperback (the inclusion of Papa Midnite). It was released on February 8, 2005 in Hong Kong, and on February 18, 2005 in the U.S. and Canada. It's rated "R" for violence and demonic images by the MPAA, but the language is pretty tame.

Things are getting strange for John Constantine (Keanu Reeves), a freelance demon hunter with the innate ability to spot demons in disguise. He attempted suicide to escape the visions, which condemned him to eternity in Hell, but was revived—irritating Lucifer (Peter Stormare), who grew to despise John for killing his Hellspawn.

Demon activity is on the rise, with more and more trying to cross over via human hosts. This is ordinarily right up John's alley, but he's preoccupied with the fact that he's dying of cancer. He appeals to the Archangel Gabriel (Tilda Swinton) for "an extension", but is flatly denied. Instead, he is enlisted by Det. Angela Dodson (Rachel Weisz) to investigate the death of her sister, another psychic. It turns out that Lucifer's son is trying to usurp him. Mammon requires the body of a powerful psychic to cross over, but John suspects that someone on Earth is working on Mammon's behalf...

Not to be confused with the Constantine television adaptation of the comic of the same name, which is more faithful to the source material.