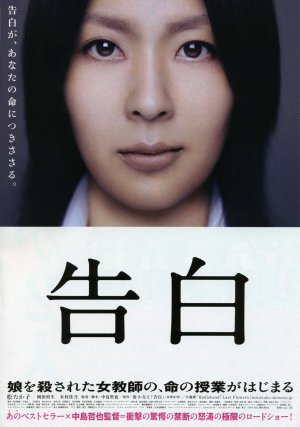 “Even if you might be protected legally, I will never forgive you.”
— Yuko Moriguchi
Advertisement:

Confessions is a 2010 Japanese thriller/mystery/horror film based on the novel of the same name. It is directed by Tetsuya Nakashima and stars Takako Matsu.

Yuko Moriguchi is a middle school teacher in charge of a class of rowdy students. They drink milk as she talks. After declaring her resignation toward the class, she then reveals her suspicion of two students for murdering her 4-year-old daughter Manami. It also turns out that she has hatched an elaborate revenge plan to punish the murderers, due to juvenile law protecting them from legal prosecution. Therefore, she tainted their milk cartons with HIV infected blood.

The film is rife with controversy. Not intended for the young or squeamish, Confessions shows how delicate life is, the ironies of poetic justice, AIDS, parental problems, and many more. Viewers are cautioned for the copious amount of gore and blood in this work.

It won many film awards, including the Japan Academy Prize, the Blue Ribbon Award, Asian Film Awards and the Hong Kong Film Awards. It is also Japan's official entry for the 2011 Academy Award for Best Foreign Film.