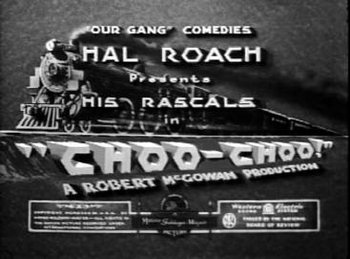 Choo-Choo is a 1932 short in The Little Rascals series. In the beginning, the gang trades clothes with some runaway orphans so that they can ride and sleep on the train (which the orphans promised would have lots of food). Because the other orphans and their matron had to leave with the train on time, the kids (and Petey the Pitbull) are taken on another train by a child-hating station worker. The kids resolve to be as bad as possible when they hear him call them "brats", and Hilarity Ensues.

Tropes found in Choo Choo include: