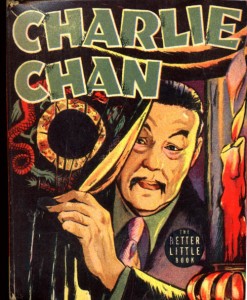 Excuse, please... When death enters window, no time for life to go by door.
Advertisement:

, connected with the Honolulu Police Department. Fascinated by the idea of an Oriental hero as a contrast to the ubiquitous Yellow Peril villains of the period, Biggers included an Oriental detective named Chan as a peripheral character in his novel House Without a Key (1925). In the 1926 novel The Chinese Parrot, Chan took center stage, and his successful adventures spanned four more Biggers novels: Behind the Curtain (1928), The Black Camel (1929), Charlie Chan Carries On (1930) and Keeper of the Keys (1932).

The character's most familiar portrayals, however, were in a series of nearly 50 films. By the time of Biggers' death in 1933, all but the last of the novels had been adapted for film (the last was adapted for the New York stage). Contrary to popular belief, Chan was portrayed by Asian actors in his earliest appearances — but not Chinese: The Japanese actors George Kuwa and Sôjin played the detective in his first two films, and E.L. Park, probably a Korean, in his third. None of these portrayals was deemed particularly successful, either by Biggers or by the public.

It was, oddly, a Swede, Warner Oland, who became in the opinion of Biggers and of most fans the ideal embodiment of the character. Oland had already played Fu Manchu and many other Asian characters in the movies, and always claimed to be of Mongolian descent himself via his Russian mothernote "I owe my Chinese appearance to the Mongol invasion

" ; he would continue to be in demand throughout the Thirties to play various Asian characters, such as Dr. Yogami in 1935's Werewolf of London.

Oland took Charlie Chan very seriously. He learned Cantonese (he speaks it pretty well in several Chan films) and read up on Chinese art and philosophy. He visited Shanghai, Beijing and Hong Kong. Some of the Chinese officials actually thought he was Chinese-American. He'd been a successful and popular actor before Charlie, but he enjoyed the role more than any other, to the point that he often was Charlie, as in Method Acting. Part of the appeal for him was his belief in social justice — he co-founded the Screen Actors Guild — and his sense that Charlie was not only an exemplary Asian American, but an exemplary American, period.

He played the detective in a series of 15 films for 20th Century Fox, starting with Charlie Chan Carries On (1931), though many fans believe that his characterization really hit its stride in Charlie Chan in London (1934). Here Charlie assumed his archetypical form: the unassuming, heavily accented but brilliant detective, spouting pseudo-Oriental aphorisms (a Flanderization which Biggers himself cordially disliked), kindly and devoted to his fractious and multifarious family, and often having to endure the feckless co-detecting effort of his thoroughly Americanized Number One Son, Lee (most famously played by Chinese-American actor Keye Luke), or others of the clan. Oland even started talking a bit like Chan in everyday life. Chan became a globe-trotter: He rarely remained home in Honolulu, but appeared against a number of glamorous and exotic backgrounds: at the racetrack, at the opera, on Broadway, in London, in Paris, in the Pyramids of Egypt, at the 1936 Berlin Olympic Games. By the time of Oland's death in 1938, Charlie Chan was one of Fox's most popular and successful film series.

So popular was he, in fact, that the studio refused to let the character die with the actor, and so the Missouri-born Sidney Toler took up the role in 1938's Charlie Chan in Honolulu. His Chan was slightly more acerbic than Oland's, and he was much given to ridiculing the efforts of his Number Two Son, Jimmy (or sometimes Tommy) Chan (Victor Sen Yung). After 11 films, Fox decided to end production of the Chan series, whereupon Toler bought the rights to the character, and proceeded to make another 11 films, with Monogram Pictures, until his death in 1947.

Bostonian Roland Winters (born Winternitz) took up the part in 1947's The Chinese Ring. By now it was apparent that Monogram was determined to milk the franchise for all it was worth, with little regard to quality.

An attempt to transfer the character to television in the person of J. Carroll Naish was made in The New Adventures of Charlie Chan (1958) with moderate success.

In Hanna-Barbera's 1972 Animated Adaptation, The Amazing Chan and the Chan Clan, Mr. Chan was portrayed for the first time by an actor actually of Chinese descent: Keye Luke, who had played Number One Son Lee Chan in the Oland series of films, and who was later well known as "Blind Master Po" from the popular Kung Fu series of the 1970s and as Gizmo's original owner in Gremlins.

A pair of Affectionate Parodies appeared as The Return of Charlie Chan (aka Happiness Is a Warm Clue) (1973) and Charlie Chan and the Curse of the Dragon Queen (1981), in which Chan was played by Ross Martin and Peter Ustinov, respectively. (A Chan-based character was also played by Peter Sellers in the 1979 omnibus mystery spoof, Murder by Death.)

In the 1990s, a number of Charlie Chan films were produced in Hong Kong by Chinese production companies. An Italian Chan appeared in 1983. There was talk in the 2000s about a screen adaptation starring Lucy Liu as the granddaughter of the famous detective, but it never came to pass.

Charlie's legacy is complicated. Intended as an anti-racist character, he is often denounced as a stereotypical mockery. English professor Yunte Huang

hopes to contextualize and celebrate Charlie's legacy in his new book

about Charlie and Chang Apana. The real Chang was an active, athletic type who solved more illegal gambling and drug smuggling cases than murdersnote and without a gun! All he ever carried was a bullwhip., but did have an even-paced, methodical investigative style and was amused by his cohorts nicknaming him Charlie Chan. He liked the films, too.note Invited to watch the rehearsals and filming for The Black Camel, Apana laughed his head off, especially when Chan is told "You should have a lie detector," and replies "Lie detector? Ah, I see, you mean wife. I have one."

Tropes Associated With This Character Include: