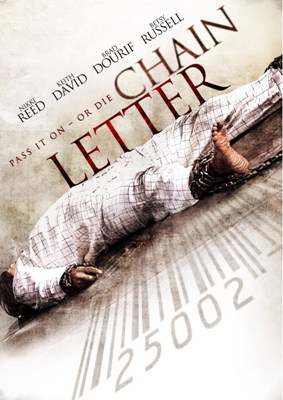 Chain Letter is a 2010 Slasher Movie about a Serial Killer called the Chain Killer (Michael Bailey Smith) who targets teenagers, by sending them an electronic Chain Letter and stating if they don't send the letter to five others, they'll die.

Californian teen Neil Conners (Cody Kasch) ends up receiving said and forwards it to five of his friends, including his sister: Rachael Conners (Cherilyn Wilson), Jessie Campbell (Nikki Reed), Michael {Michael J Pagan}, Dante (Noah Segan) and Johnny Jones (Matt Cohen). One by one they begin to be hunted down by the Chain Killer, while Detective Jim Crenshaw (Keith David) attempts to track him down and save the teens.

Not to be confused with the trope Chain Letter, even though the film centers around them.

Distinct tropes of this film: