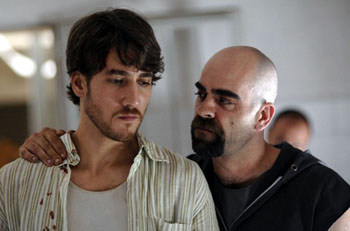 Cell 211 is a 2009 Spanish film directed by Daniel Monzon. The protagonist, Juan Oliver (Alberto Ammann), is a young man Happily Married to the beautiful Elena (Marta Etura), who is 6-months pregnant with their first child, and this is the first day in his new job. All well and right, if that job wasn't as a prison guard and there was a riot in the High Security zone led by the scary convict Malamadre (Luis Tosar) that very same day. Now alone and trapped inside Cell 211, Juan must disguise himself and pretend to be another inmate in order to guarantee his own safety, all while trying to draw a plan to get him out of there.

The problem is that he does it so well, however, that soon he becomes something of a second in command to Malamadre. And everything gets worse from there. Very, very, very worse.

Though taking place in a prison, the movie does not follow most of the tropes associated with the prison genre. It won 22 awards, including the Goya award for Best Spanish Film.