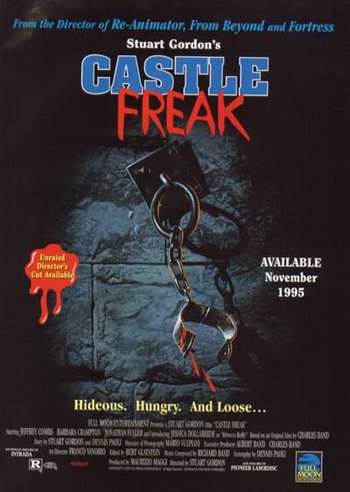 Castle Freak is a 1995 horror movie directed by Stuart Gordon, the director of Re-Animator and From Beyond and starring two of the lead actors from the both of them, Jeffrey Combs and Barbara Crampton.

John Reilly (Combs) has inherited a castle in Italy, where he moves in with his wife, Susan (Crampton), and blind daughter, Rebecca. As time passes, strange happenings occur in the castle, and it becomes clear to John that there’s someone — or something — living in the castle with them. And it’s not friendly.

Loosely based on the H. P. Lovecraft short story, The Outsider.

Tropes found in Castle Freak include: