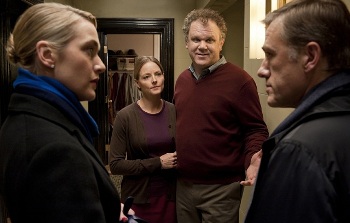 The film proper is set almost entirely in one New York apartment, except for two brief scenes at the beginning and end. There are only four actors in the whole film, with the exception of a few extras we see in the introduction and epilogue and some voices we hear over the phone. It is also notable for occurring almost in real time, save for the aforementioned bookends.

Not to be confused with the comic book character, although they both share a New York setting (and a taste for Black Comedy).