Film / Caramuru: The Invention of Brazil 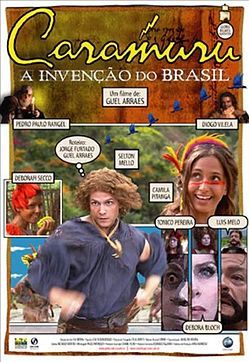 Caramuru: A Invenção do Brasil was a 2001 Brazilian love comedy based on the poem Caramuru which was inspired in the real-life figure Diogo Alvares Correia. The story portrays Diogo as a young artist who turns to cartography after getting on some nobleman's bad side. When he gets involved with a French courtesan named Isabelle who steals one of his maps, he is arrested and sent as an exile in one of the Portuguese expeditions to India. However, his ship gets wrecked and he ends up on the coast of the lands that would later be known as Brazil and ends up meeting with Tupinambá princess Paraguaçu, whom he falls in love with and later on has other adventures when the European explorers arrive to settle.

It was originally aired as an TV documentary in 2000 interlaced with several historical tidbits presented by actor Marco Nanini as the narrator to mark the 500th anniversary of Brazil's discovery by the Portuguese before being released on theaters the year later.

This movie features examples of the following tropes: