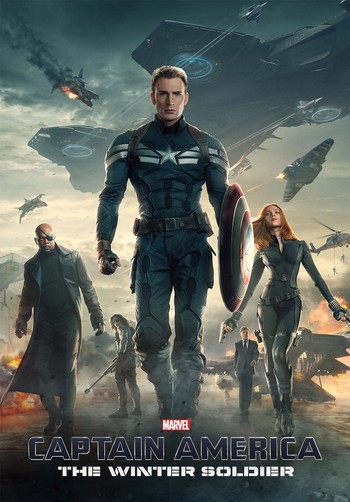 "Don't trust anyone." note From left to right: Nick Fury, the Winter Soldier, Captain America, Alexander Pierce, and Black Widow.
"The price of freedom is high. Always has been. And it's a price I'm willing to pay. And if I'm the only one, then so be it. But I'm willing to bet I'm not."
— Captain America
Advertisement:

Captain America: The Winter Soldier is the 2014 sequel to Captain America: The First Avenger and the ninth film in the Marvel Cinematic Universe and the third instalment of Phase 2, directed by Joe and Anthony Russo of Community and Arrested Development fame. It can essentially be called a superhero-conspiracy thriller film.

Picking up after the events of The Avengers, the film revolves around the still struggling Man Out of Time, Steve Rogers, working with S.H.I.E.L.D. to battle new global threats as Captain America. However, after an assassination attempt on S.H.I.E.L.D. director Nick Fury by the enigmatic Winter Soldier, Steve discovers sometimes the greatest threats can come from within, and goes on the run with Black Widow to uncover the truth.

As with Iron Man 3 before it, Marvel released an animated movie called Avengers Confidential: Black Widow & Punisher as a tie-in shortly before the film hits theaters. A one-shot comic book prequel called Captain America: Homecoming was also released two weeks before the film. The Agents of S.H.I.E.L.D. episode that aired the next week also ties in heavily with the movie, showing the events of the film from the perspective of Coulson's team, and the rest of the first season (along with most of the second season) is spent dealing with the aftermath.

It was followed by Avengers: Age of Ultron, which wraps up the last few plot threads, along with a direct sequel, Captain America: Civil War, which also serves as a crossover with Iron Man, Black Panther, Spider-Man, and other superheroes.

open/close all folders
Tropes # to C
Tropes D to L
Tropes M to R
Tropes S to Z
"I'm with you to the end of the line."
Feedback

The Price of Freedom

The Price of Freedom