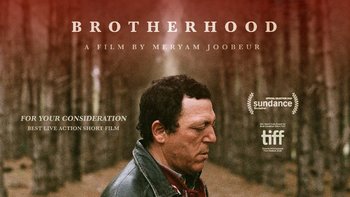 Brotherhood is a 2018 short film (25 minutes) from Tunisia, directed by Meryam Joobeur.

The setting is coastal Tunisia. A family—father Mohammad, mother Salha, early-teens son Chaker and youngest son Rayene—are herders with a home in walking distance of the beach. One day Mohammad and Chaker return from being out with the flock, and find eldest son Malek at home. Malek, it seems, left the family some time ago to join ISIS and fight in Syria. The prodigal son has returned, along with a pregnant 14-year-old wife named Reem.

While his mother and brothers greet Malek with open arms, Mohammad can't forgive. Malek makes tentative gestures at reconciliation but Mohammad rejects them. He seems particularly put out by the presence of Reem, who wears the full-body niqab. Eventually Mohammad makes a terrible decision.