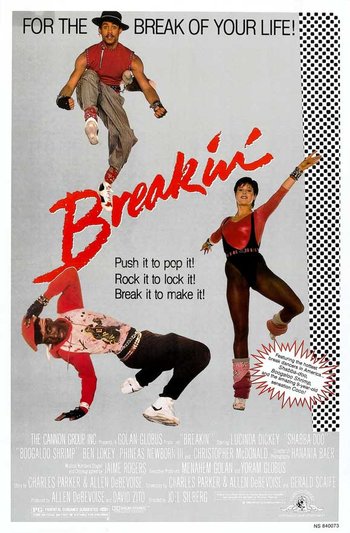 Breakin' is a 1984 American comedy-drama movie about breakdancing.

Kelly Bennett (Lucinda Dickey) is a young dancer training under the supervision of the choreographer Franco (Ben Lokey). Through her friend Adam, Kelly is introduced to two street dancers, Ozone (Adolfo "Shabba Doo" Quiñones) and Turbo (Michael "Boogaloo Shrimp" Chambers) on the boardwalk at Venice Beach. Kelly becomes enamored with their dancing and becomes friendly with the men, dancing and talking with them. Eventually, after dancing together the three form a team. Kelly eventually leaves her studio as her choreographer is a traditionalist as he does not respect breakdancing (on top of making unwanted advances on her), and the trio of her, Ozone and Turbo find themselves on an uphill climb to make their breakdancing gain the respect of the dancing community, and... well, that's pretty much it; most of the movie is just corny, entertaining dancing.

Of course, today the movie is best known for its sequel (released later that same year) Breakin' 2: Electric Boogaloo, which spawned the "Electric Boogaloo" joke, used to refer to any pointless or strangely-named sequel.