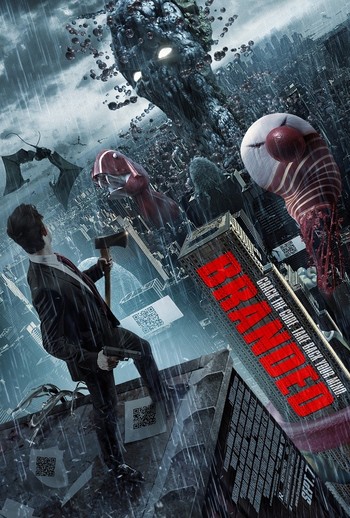 Branded is a 2012 Russian-American film about the evils of advertising, though it gets that message through in a severely trippy way.

Misha Galkin (Ed Stoppard) is a marketing executive working in Russia. One day, he meets the boss's daughter, Abby Gibbons (Leelee Sobieski). The two quickly hit it off despite her father's attempt to keep them apart, and Abby enlists Misha's help in a Russian plastic surgery show (an adaptation of ABC's Extreme Makeover). Meanwhile, marketing guru Joseph Pascal (Max von Sydow) works with the heads of various fast food franchises to make fat popular, and Misha and Abby wind up the scapegoats for his fear-based marketing campaign which rises from the star of their show being rendered comatose by the surgery.

After his life goes downhill from there, Misha retreats from the city to the country, far from the marketing which he now believes causes harm to others. Guided by a dream, he conducts an elaborate ritual where he slaughters a red cow and bathes in its ashes. He is picked up by Abby, who wants him to meet his son. Misha then learns he's been given the power to see the living personifications of brands, being fed by the public's desire for them.

It has nothing to do with the Western Series of the same name.