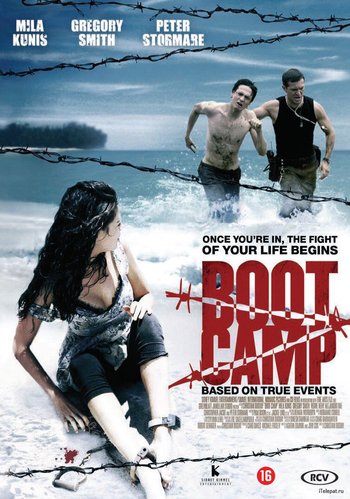 Boot Camp (also released in the UK as Punishment) is a 2008 psychological thriller film written by Agatha Dominik and John Cox and directed by Christian Duguay. The film stars Mila Kunis, Gregory Smith and Peter Stormare.

When provocatively impish drug addict Sophie is forcibly shipped off by her passive mother and brutally domineering stepfather to dodgy, messianic and platitude-spouting Dr. Arthur Hail's completely isolated Fiji island boot camp for wayward teens (a.k.a. Camp Serenity), her perfectly respectable boyfriend Ben refuses to stand passively by. He fakes a drug problem to get himself enrolled in Dr. Hail's Advanced Serenity Achievement Program, where he plans to find and escape with Sophie. Meanwhile both teens witness and endure the physically harsh and psychologically brutal conditions fostered by the doctor and enforced by Logan, his militaristic and imposing chief of security - where all "enrollees" have "less rights than prisoners on death row."