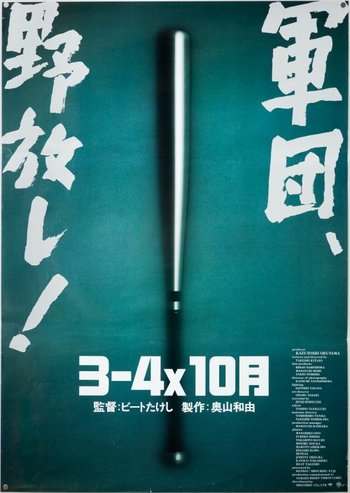 Masaki is quite the simple-minded fellow. When he doesn’t work at a gas station, he occasionally plays at a base-ball team. One day, he bas a rough encounter with a Yakuza, and the gas station’s put at stake. Hopefully, Masaki has a friend who was part of a Yakuza clan.

Released in 1990, this is Takeshi Kitano’s second film, but also his first venture and proper credit as a screenwriter and editor. Some of the elements of this movie would go on to become staples of Kitano’s filmography (most notably Yakuzas and Beach settings), and he’ll develop these themes further in Sonatine.

Has nothing to do with Boiling Point: Road to Hell, Ramsay's Boiling Point, the action movie with Wesley Snipes, or the MTV show. However, the film's original japanese name is San tai Yon ekkusu Jugatsu which can translate to 3 to 4x October.