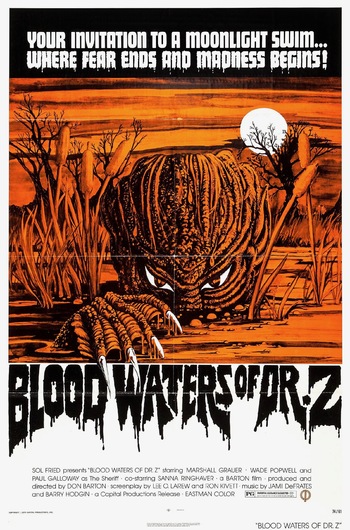 "Sargassum — the weed of deceit."
"Sargassum fish — mighty hunter of the deep. What an inspiration you have been in my plot."
Advertisement:

It's about Dr. Kurt Leopold, a mad scientist who wants to get revenge on all those who thought he was silly for wanting to make a half-man, half fish. Using a chemical of his creation (the titular "ZaAt")note  Z-sub-A and A-sub-T , he makes himself into his first test subject, and turns the local catfish huge and man-eating. Next steps: kill those who wronged him, and find a mate to breed the new race, and then conquer the universe.

Shot on location in, of course, Florida.

it as well, as did New York Daily News' Phantom of the Movies, a decade later in 1984. (It took that long for the film to reach the Times Square grindhouse theaters.)

Tropes present in The Blood Waters of Dr. Z include: