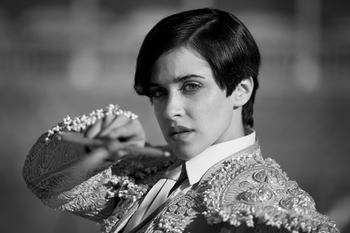 Blancanieves is a 2012 film from Spain directed by Pablo Berger.

The title translates out to "Snow White", and, yes, it is a retelling of the story of Snow White, set in the 1920s. A champion bullfighter, Antonio Villalta, is gored in the ring. His heavily pregnant wife Carmen, watching from the stands, is so shocked that she goes into labor. Antonio is left a quadriplegic, while Carmen dies in childbirth.

One of Antonio's nurses, Encarna, schemes her way into marrying Antonio, who winds up essentially a prisoner in what was once his own home. Antonio and Carmen's daughter, also named Carmen, is sent off to live with her grandmother. When the grandmother dies Encarna grudgingly takes Carmen in and turns her into a scullery maid (this part is more like Cinderella). Eventually, Encarna realizes that she does not need Antonio around to enjoy Antonio's money, and kills him via a Staircase Tumble. She sends her chauffeur/henchman off with Carmen with orders to kill her, but Carmen survives. She winds up taking refuge with a company of dwarves. Bullfighting dwarves. Bullfighting dwarves who call her "Blancanieves".

Blancanieves is a Deliberately Monochrome Silent Movie shot to deliberately mimic the look and feel of 1920s European silent film (hence the 1920s setting for the story.) Compare The Artist, a 2011 film also shot as a silent movie that mimicked the look of 1920s Hollywood.