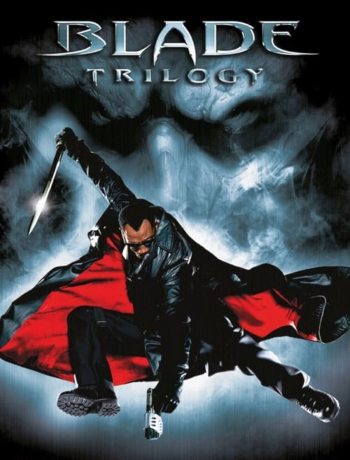 Blade is a vampire hunter comic book character from Marvel Comics created by Marv Wolfman and Gene Colan who debuted in The Tomb of Dracula #10 (July, 1973). New Line Cinema acquired the film rights to the character in the mid-1990s, and released several films from 1998 to 2004, comprising the Blade Trilogy, starring Wesley Snipes in the eponymous role.

In the movies, Blade's Super Hero Origin is that vampires attacked his mother during childbirth, which had a bizarre side-effect in making him part-vampire. He remained mostly human but gained all the strengths of a vampire and (almost) none of their weaknesses. He can walk in sunlight, is not allergic to garlic or silver, heals quickly and has all their enhanced senses. There is a slight catch, however: Blade still gets the "hunger" for blood and is never quite satisfied with an artificial substitution. While vastly outnumbered, Blade makes do working with his mentor, a grizzled veteran vampire hunter named Abraham Whistler, who manages to devise all sorts of vampire hunting gear.

The vampires are insanely rich, powerful and secretly in control of the world from behind the scenes with their own research labs and army. But Blade is still a legend among them, called by them "The Daywalker."

The movies in the trilogy are, in order:

All three movies star Wesley Snipes as Blade and Kris Kristofferson as Whistler. In addition to the movies there was a spinoff TV show titled, creatively, Blade: The Series. The first film helped usher in the current era of consistently well-done, serious comic book films, coming earlier than X-Men or Spider-Man. As part of a four series deal between Marvel and Madhouse (the others being X-Men, Wolverine, and Iron Man), he stars in his own anime, which premiered on July 1st, 2011.

That same year, Marvel announced that New Line's film rights to Blade had expired and reverted to them, and that they had no plans to introduce him to the Marvel Cinematic Universe. Nonetheless, rumors of a revival persisted years later, with Snipes himself has said he has been approached to reprise the role. Eventually, a Blade Continuity Reboot set in the MCU was announced, alongside the reveal that Mahershala Ali would be portraying the character going forward. The film is planned to arrive sometime in 2022 or later as part of Marvel's Phase 5 slate.