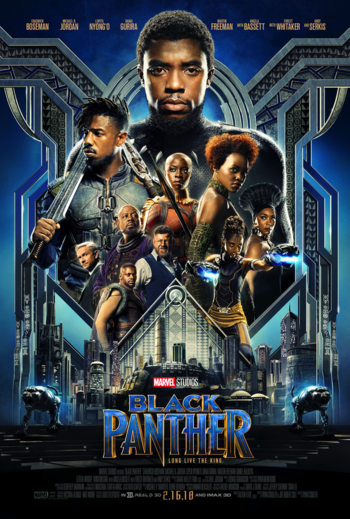 "Wakanda will no longer watch from the shadows.
We cannot. We must not."
"You are a good man, with a good heart. And it's hard for a good man to be king."
— T'Chaka
Advertisement:

Black Panther is a 2018 film directed by Ryan Coogler (Fruitvale Station, Creed) and written by Coogler and Joe Robert Cole, based on the Marvel Comics character of the same name. It is the eighteenth film installment of the Marvel Cinematic Universe, and the sixth installment of Phase 3.

A week after the events of Captain America: Civil War, T'Challa (Chadwick Boseman) returns home to the reclusive, technologically advanced African nation of Wakanda, to succeed his late father T'Chaka (John Kani) as their king and protector — the Black Panther.

However, the combined forces of Erik "Killmonger" Stevens (Michael B. Jordan) and Black Market Arms Dealer Ulysses Klaue (Andy Serkis) seek to destroy Wakanda from the inside and usurp T'Challa's throne.

A companion soundtrack — Black Panther: The Album — was released in conjunction with the film, produced and curated by Kendrick Lamar, featuring the likes of himself, SZA, and other artists affiliate from Top Dawg Entertainment.

A sequel, Black Panther: Wakanda Forever, was confirmed to be in development at 2019's San Diego Comic Con, and released on November 11, 2022, with Ryan Coogler returning to write and direct. Notably, it was originally intended to be a straightforward sequel to the first film; however, with Chadwick Boseman tragically dying from colon cancer on August 28, 2020, it was announced that the role of T'Challa would not be recast to respect his memory, and the film would be reworked to serve as a tribute to Boseman, with it and any other future sequels instead focusing on the world of Wakanda around T'Challa as well as other characters introduced in the first movie.