Film / Birdman or (The Unexpected Virtue of Ignorance)
aka: Birdman 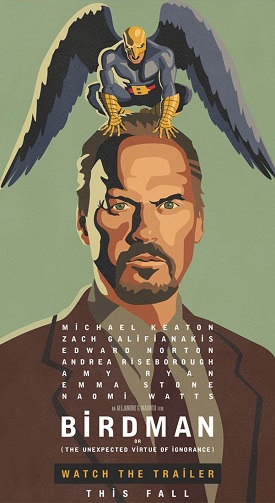 "I'm a fucking actor! This play cost me everything!"
"How did we end up here? This place is horrible. Smells like balls."
Advertisement:

It follows Riggan Thomson (Keaton), a washed-up actor best known for playing the superhero Birdman in a series of movies, as he tries to revive his career by writing, directing, and starring in a Broadway adaptation of Raymond Carver's short story What We Talk About When We Talk About Love.

Along the way, he faces various difficulties both on and off stage, as he battles his own ego (and alter ego), a narcissistic actor (Norton) who attempts to wrestle control away from Riggan, and a critic hell-bent on destroying the production, while attempting to repair his relationship with his family, in particular his daughter Sam (Stone).

Notable talking points for the film included its original music consisting entirely of solo jazz drums, its score being infamously disqualified from Academy Award consideration for including classical music, and the fact that it's largely structured to appear as if it was filmed in one continuous take. (Even with this effect being achieved through editing, the film still has only several dozen visible cuts and required takes of 10-15 minutes in length.)

Not to be confused with the Hanna-Barbera cartoon series from the '60s or the satirical show which had said cartoon's hero take up law practice or the Japanese comic of a similar name. Or the rapper. Or that bird-themed skateboarder who inspired a line of skateboarding video games.

"Let's go back one more time and show them what we're capable of!"