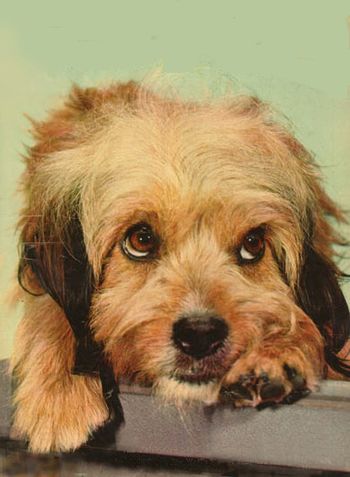 Benji is the name of a fictional dog who has been the focus of a series of movies from 1974 through 2018. It is also the title of the first film in the Benji series. While there is only ever one Benji at a time, there have been five dogs to play Benji, the first was Higgins who is best probably known for having played the character "Dog" on the 1960s television series Petticoat Junction and later starring in the 1974 movie Benji. He was trained and owned by Frank Inn, while Joe Camp is the creator and director of the films.

Higgins was originally a rescue dog adopted from the Burbank Animal Shelter by trainer Frank Inn, and according to him was the smartest dog he had ever trained. In 1971, Higgins starred in Mooch Goes to Hollywood. As a senior dog (aged 11) he was then retired from acting, but in 1974 starred in his final and greatest role, the loveable mutt in Joe Camp's family film Benji.

The second dog to play Benji was Higgins' daughter, Benjean. She starred in three movies (For the Love of Benji, Benji the Hunted, and Oh! Heavenly Dog), four television specials (Benji's Very Own Christmas Story, Benji Takes a Dive at Marineland, Benji at Work, and The Phenomenon of Benji), and a TV series (Hanna-Barbera's Benji, Zax & the Alien Prince).

The dog photographed on the cover of Joe Camp's book Benji & Me was the third Benji. He was distantly related to Higgins and Benjean but never starred in any films.

The fourth Benji was a female dog named Moochie, and the first to be unrelated to the previous Benjis. Moochie was adopted from the Humane Society of South Mississippi in Gulfport after being abandoned and rescued from the streets of Pass Christian. She began filming her first movie a year and a half later. Benji Off the Leash was released in 2004.

The fifth and current Benji is also a rescue named Fairfield who was adopted from a Virginia Human Society after being found a malnourished stray in a grocery store parking lot, he starred in the Netfix re-boot of the original Benji film which was released in 2018.

The Benji series provide examples of: