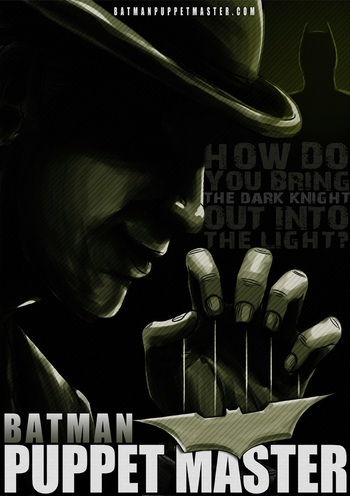 "How do you bring the Dark Knight out into the light?"

Batman: Puppet Master is a Batman fan film set in the universe of The Dark Knight Trilogy. Set in-between The Dark Knight and The Dark Knight Rises, the video is intended to explain why Batman went into hiding after the end of the former, but the actual content of the video and a Sequel Hook at the end imply that it will actually be part of a series.

After Batman becomes a wanted criminal for the purported death of Harvey Dent, the FBI sends its greatest secret agent, Edward Nigma, to catch him. However, that isn't enough for Nigma; he wants to prove his greatness, and for him that means unmasking the Batman and revealing his secret identity. To do this, he works with the mob, led by a mysterious figure known only as "Scarface", and becomes increasingly obsessed with his prize...

Since its release (to tie in with the release of The Dark Knight Rises), the video has been praised by numerous bloggers and reviewers for its high production values and great storytelling.

Watch the video on its official site, here