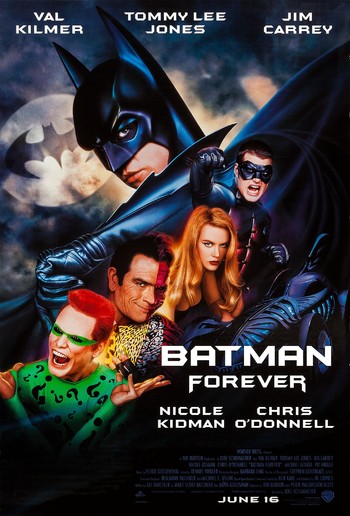 "Riddle Me This...riddle me that...who's afraid of the big, black Bat?"
Gang Leader: Who the hell are you?
Dick Grayson: I'm Batman.
(The entire gang laughs at him.)
Dick Grayson: Hey, so I forgot my suit, all right?!
Advertisement:

After the release of Batman Returns, Warner Bros. was in something of a difficult position. While they wanted to wallpaper their holiday mansions with $100 bills and Batman was obviously the franchise to bet on, the extremely dark and depressing storyline of Batman Returns made it a harder sell to their intended audience, namely everybody in the world. It wasn't exactly a family movie. By now, they wanted something different for the next film, limiting Tim Burton to the role of producer and hiring Joel Schumacher to take over directing duties. And for good or for ill, 1995's Batman Forever, the third movie in the Batman Film Series, was certainly different.

Bruce Wayne/Batman (Val Kilmer) battles Harvey Dent/Two-Face (Tommy Lee Jones), a struggle that gets tougher when Edward Nygma/The Riddler (Jim Carrey) enters the picture, as both have personal vendettas against the Caped Crusader and his secret identity, respectively. Bruce finds an ally in orphaned acrobat Dick Grayson (Chris O'Donnell), who discovers his secret and becomes Robin to take revenge against Two-Face, who killed his family. As a sub-plot, Bruce deals with a budding romance with psychiatrist Dr. Chase Meridian (Nicole Kidman), something that naturally causes some problems because of his double-life.

"I'm having a breakthrough! And a breakdown? MAYBE!"

After the Riddler and Two-Face forge an alliance, there is a montage of the two of them going around Gotham City and robbing jewelry stores.

After the Riddler and Two-Face forge an alliance, there is a montage of the two of them going around Gotham City and robbing jewelry stores.