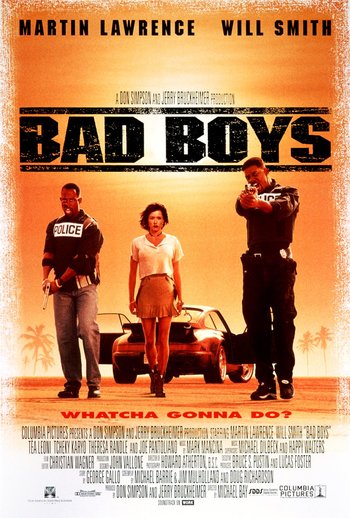 Bad Boys is a 1995 action comedy film, directed by Michael Bay in his directorial debut, and produced by Don Simpson and Jerry Bruckheimer, producers of Top Gun and Beverly Hills Cop, and starring Will Smith and Martin Lawrence.

Marcus Burnett (Lawrence) and Mike Lowrey (Smith) are best friends and detectives in the narcotics division of the Miami-Dade Police Department. They have just completed the biggest bust of their career, having confiscated about $100 million dollars worth of heroin. Which would have probably earned them an award or two...if the heroin wasn't immediately stolen from a supposedly secure police vault. Now the two partners have some investigation to do, while the Internal Affairs Office is threatening to shut down their entire division and Captain Conrad Howard (Joe Pantoliano), their chief, is getting desperate for a breakthrough. Their main suspect is Fouchet (Tchéky Karyo), a French drug lord who's active in their area. Their only lead to him is Julie Mott (Téa Leoni) who recently witnessed her best friend get killed on his orders.

The film gained a cult following and spawned a 2003 sequel, Bad Boys II, which in turn spawned a video game adaptation, Bad Boys: Miami Takedown. A third film called Bad Boys for Life was released in 2020. A Spin-Off TV series called L.A.'s Finest has also been announced. Not to be confused with the 1983 film starring Sean Penn.

Marcus' kids see him and Mike on the news following the car chase. This leads his wife to realise that he lied about going to Cleveland.

Marcus' kids see him and Mike on the news following the car chase. This leads his wife to realise that he lied about going to Cleveland.