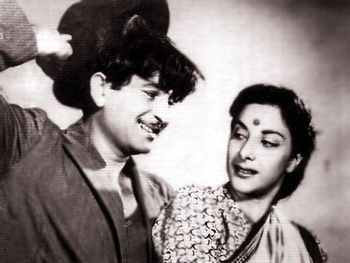 An vindictive judge taunts a robber that he is a criminal because he was born a criminal. The thief, unable to take this insult, vows to ruin the judge's life and prove to him that nurture trumps nature.

Awaara is the story of a poor tramp named Raj who befriends the rich Rita as a child. His poverty prevents him from enrolling in school with her but he never forgets her as he reaches adulthood. Until that time, he and his father figure Jagga resort to petty theft to make ends meet. When carrying out a bank heist, he robs the purse of (unknown to him) Rita for keys to her car. After finding the purse empty of car keys, he returns the purse to Rita and they then become reacquainted. They fall in love soon enough but his poverty and life of petty theft and her wealth and her relationship to the Judge strains their relationship.

Raj soon learns that Jagga, his trusted father figure, is actually a thief who kidnapped Raj's mother from his father to exact revenge. Raj kills Jagga in revenge and is jailed by the Judge who is in fact his biological father. Rita is his lawyer and she convinces the Judge to reduce the sentence to three years. She vows to wait for him when he returns from prison.

Starring the unforgettable Nargis and Raj Kapoor, part of a hit jodi and one of the most beloved and classic films in Indian film industry.