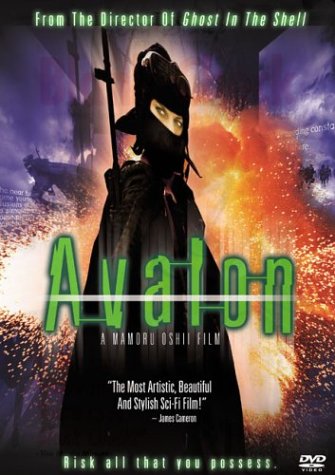 Avalon is a live-action film directed by Mamoru Oshii (of Patlabor and Ghost in the Shell fame) and released in 2001. It is a joint Japanese-Polish production: written and directed by Japanese but filmed in Poland with Polish actors speaking their native tongue.

At an unspecified time 20 Minutes into the Future, a run-down Cyberpunk society offers so little to its youth that they turn en masse to an illegal virtual reality online wargame, Avalon. Some players have become so skilled that they have turned gaming into a job of sorts, while others have dived so far into the addictive online world that their physical bodies have become vegetative.

Avalon starts out as a First-Person Shooter game, and players level up as they earn points. It's possible to team up.

The film's protagonist is Ash, a reclusive young woman who ekes out a living by cashing in the points she earns in the game. A former teammate of hers talks her into searching for an alleged Secret Level in the game, a level so realistic it is supposed to be undistinguishable from real life. Ash finds the way to level up to that "Special Class A" and discovers what's behind the game...

Oshii's 2009 film Assault Girls is set in the same universe, but is not a direct sequel.

Do not confuse this with the Josh Phillips webcomic of the same name, the Meg Cabot young adult novel and manga series Avalon High, or the Barry Levinson movie about Polish-Jewish immigrants to the United States in the early 1900s. Or Frankie Avalon, for that matter.