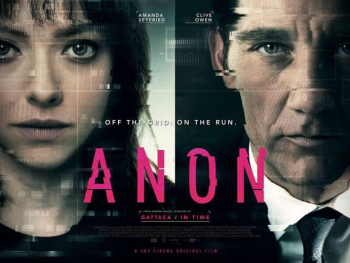 "It's not that I have something to hide, it's that I don't have anything I want you to see."
— Anon
Advertisement:

Anon is an American 2018 neo-noir crime drama film set in a dystopian future where everyone by law has their memories stored online. Directed by Andrew Niccol, it stars Clive Owen as Detective 1st Class Sal Frieland and Amanda Seyfried as The Girl, an anonymous hacker being investigated by the former.