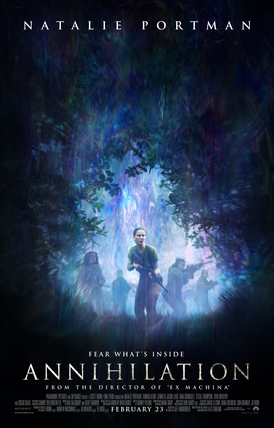 One day, a mysterious meteorite lands by a lighthouse somewhere in the southern area of the USA. Shortly thereafter, ground zero is surrounded by a strange iridescent shimmer, which is apparently some form of radiation emitted by the meteorite. Repeated attempts by the US government to examine the phenomenon all end in failure, as everyone sent in close — be it people or machines — immediately have their communication equipment go haywire once they cross the border of the affected area, and then they are never seen again. What is more worrying is that "The Shimmer" — now given the official codename "Area X" — is slowly but surely expanding outwards. And while the government can quarantine the area, they have no way of stopping the spread.

Until one day, a soldier by the name of Kane (Isaac) emerges from Area X as the Sole Survivor of his expedition after having been missing in action for twelve months. The clearly disturbed Kane, however, is unable to offer any insight, as he speaks in riddles and soon thereafter collapses into a coma from massive internal bleeding. Lena (Portman), a biologist and Kane's wife, decides to put her name forward on another expedition into the zone in an attempt to figure out what happened to her husband. What she and her team — consisting of psychologist Ventress (Leigh), physicist Josie Radek (Thompson), paramedic Anya (Rodriguez), and geologist Cassie Shepherd (Novotny) — finds is not what any of them expect...

Not to be confused with Marvel Comics's Annihilation, or the Forgotten Realms novel Annihilation.

A rather horrifying bear-like monster from Area X that can imitate the dying screams of its victims.

A rather horrifying bear-like monster from Area X that can imitate the dying screams of its victims.