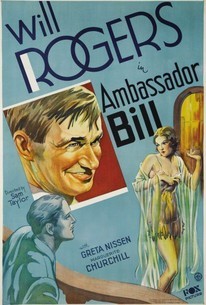 Will Rogers is Bill Harper, an Oklahoma cattle rancher who has been appointed ambassador of Sylvania. Sylvania is a country that is constantly having revolutions - none of them successful - because it is ruled by the Prince de Politikov. There is also an actual queen regent and an actual boy king; the previous king abdicated because of a lovers' quarrel with the queen gone out of hand. He is a friend of Bill's, though.

Bill Harper has been appointed ambassador to negotiate a trade treaty with the country's Parliament, and also because the previous ambassador has shell shock from all the revolutions. Being an Oklahoman cattle rancher, he doesn't always follow or respect decorum, but he tends to get away with it. He proceeds to Americanize the king, giving him a cowboy suit and air rifle, teaching him and other local boys baseball, and telling him legends of Babe Ruth.

Ambassador Bill is also trying to get the queen and the ex-king back together. He hates broken homes and the idea of boy kings, though he does like the queen and her son Paul himself.

A member of the American diplomatic corps is in with de Politikov; there's a routine inspection of American embassies going on anyway, but this one begs for priority, and so Senator Pillsbury, a fat blowhard Senator who makes very long speeches, enters the picture. He doesn't actually do much - after all, he's an isolationist, so he's there to stop things from happening. He does make it easier to make jokes about Congress and Congressmen, and to play with the two meanings of "republican" - the American political party (which he belongs to), and the movement to abolish the monarchy in Sylvania (which he knows nothing about until it's too late).

Ambassador Bill loses his position because of a sex scandal with a countess friend of de Politikov's - it was Not What It Looks Like, and it was not even what she was aiming for, but it was bad enough. But just before he goes home, the ex-king holds another revolution, the most dangerous yet...

And it's all a comedy relating to politics circa 1931. And it's good!

Features a young Ray Milland in one of his first Hollywood film roles.