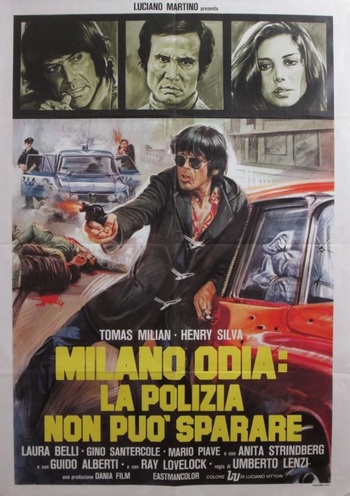 "There is a reason for every living creature... with one exception."
— Poster tagline
Advertisement:

Almost Human (1974), also called The Death Dealer and The Kidnapping of Mary Lou, is an Italian poliziottesco film directed by Umberto Lenzi, with a musical score composed by Ennio Morricone.

Giulio Sacchi (Tomas Milian) is an trigger-happy small-time crook who, after getting kicked out of his gang for murdering a cop, kidnaps a wealthy heiress for a half-billion lire ransom. Straight-laced cop Walter Grandi (Henry Silva) follows the trail of drug-fueled death and destruction left in his wake, and tries to catch him before its too late.