Film / After the Rain 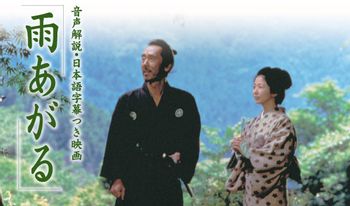 After the Rain (original title 雨あがる) is a Japanese film directed by Takashi Koizumi and released in 1998. It was written by legendary filmmaker Akira Kurosawa, who was also supposed to direct but died just as the shooting was about to begin, and his assistant took over.

Set during the Tokugawa Era, the film tells the story of Misawa Ihei, a Rōnin who wanders on the roads of Japan in search of employment, his devoted wife in tow. Misawa's problem is that he's too good at what he does, and attracts jealousy and resentment wherever he goes. But he is a genuinely selfless man, entirely devoid of petty ambition.

After being stuck in an inn for several days during a raining spell, he meets the local daimyo and hopes to finally get a steady job as his retainer.