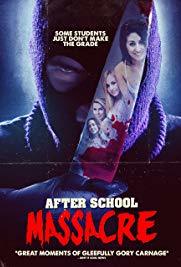 They didn't make the grade.
Advertisement:

After School Massacre is a 2014 American Slasher Movie.

Ty Anderson is a high school teacher being pestered by some of his students to accept their Facebook friend request. After relenting, he's fired for being unprofessional. This causes him to snap and murder the principal before escaping into the night. That night, the same girls are having an unsupervised sleepover. Naturally, Anderson finds them and the bodies start dropping.