Film / Ace in the Hole 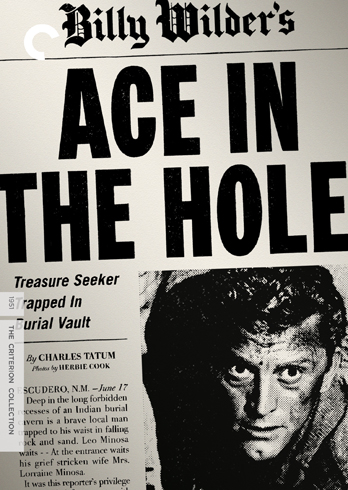 Ace in the Hole (also known as The Big Carnival) is a 1951 Film Noir directed by Billy Wilder and starring Kirk Douglas.

Chuck Tatum (Douglas) is an abrasive, tough reporter looking for a chance to make a name with a big news story. Unfortunately he’s stuck in a little town where almost nothing happens. One day, while going to report on a nearby town's annual rattlesnake hunt, he runs across a much better story: a man, named Leo Minosa, who's been trapped by a cave-in. Tatum sees this as his big chance and tries to squeeze the news for all its worth, convincing the local sheriff and engineer to prolong the rescue labor for at least a week.

One of the most famous movies about irresponsible reporting out there. It wasn’t very well received when it was first released, but with time it has found new respect from the critics.

Not to be confused with the 1942 Woody Woodpecker short of the same name.