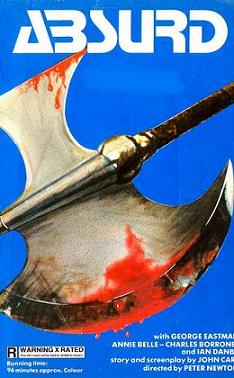 Absurd (1981) (also known as Rosso Sangue, Anthropophagus 2, Horrible, The Grim Reaper 2 and Zombie 6: Monster Hunter) is an Italian horror film considered to be an unofficial sequel to The Anthropophagus Beast. It was directed by Joe D'Amato, was written by George Eastman, and it was on the Video Nasties list in the early 1980's.

The plot concerns a nearly invincible man named Mikos Stanopolous whose blood coagulates incredibly fast. The rapid coagulation is a gift that has made him insanely homicidal. A priest pursues Mikos to try to destroy him, knowing that the only way to do so is to destroy the brain. Naturally, given the movie's reputation, things are pretty much required to get worse before they get better.

This movie inspired the name of German black metal band Absurd, a national socialist band who committed murder in 1993.