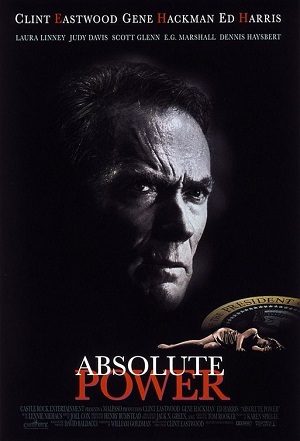 Absolute Power is a 1997 film directed by Clint Eastwood. It is adapted from a 1996 political thriller novel by David Baldacci, with significant changes including omitting the novel's protagonist Jack Graham.

Luther Whitney (Eastwood) is a professional burglar looking for his next hit. He decides to target the mansion of elderly billionaire Walter Sullivan (E. G. Marshall), since Sullivan and his much younger wife Christy (Melora Hardin) are supposed to be vacationing. Instead the mansion is visited by Christy and her current lover, President Alan Richmond (Gene Hackman). Both are drunk and ready to mate, with Luther a reluctant peeping tom.

Richmond suddenly turns violent, inspiring Christy to grab a letter opener and turn it on him. Two agents of the Secret Service respond to their President's call for help. Agents Bill Burton (Scott Glenn) and Tim Collin (Dennis Haysbert) shoot the woman down. Then the trio and Chief of Staff Gloria Russell (Judy Davis) arrange the scene to appear that an intruder killed her.

Luther escapes, but not unnoticed. He finds himself both suspected for the murder, and with a price on his head. He has to prove he had nothing to do with it. His only allies are his estranged daughter, prosecuting attorney Kate Whitney (Laura Linney), and police detective Seth Frank (Ed Harris), who knows something fishy is going on. Naturally, the President wants them all dead.