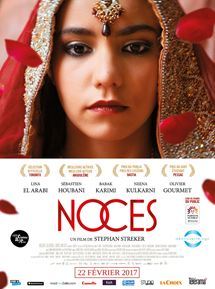 A Wedding (French: Noces) is a 2016 Belgian drama film directed by Stephan Streker. The plot is based on the true story of Sadia Sheikh.

Zahira Kazim is a teenager of Pakistani descent. She lives in Belgium with her family. She gets pregnant. Her family encourages her to have an abortion and then tries to force her to marry a Pakistani.

A Wedding provides examples of: