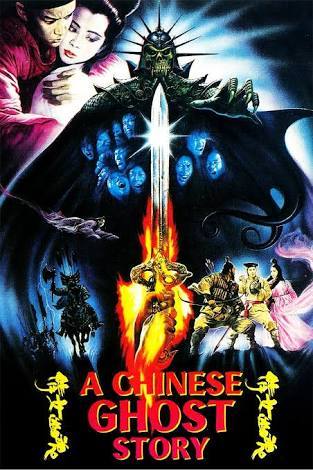 A Hong Kong fantasy-horror-comedy film series by Tsui Hark. The original film was released in 1987. It's an adaption of the 1960 Shaw Brothers classic, The Enchanting Shadow, which was based on Qing dynasty writer Pu Songling's Strange Stories from a Chinese Studio.

Ning, played by Leslie Cheung, is a timid tax collector living somewhere in Imperial China. His job requires him to travel to rural areas, and this way he arrives at a certain town, but he's broke, so he is forced to seek shelter in a deserted temple in the forest on the outskirts. That night in the temple, Ning meets a beautiful and alluring young maiden called Nie. However, when he later recalls last night's events the next day, he becomes increasingly fearful and superstitious. It turns out Nie is actually a spirit, enslaved by a Tree Demon who forces her ghosts to kill men. But Ning manages to fall in love with her in the meanwhile, and decides to free her, and to do this enlists the help of Yin, a Taoist priest and wizard and all-round badass.

There were two sequels, released respectively in 1990 and 1991. In the first of them, Ning gets into a political affair which turns out to have a supernatural background. In the second, which is set a century after the first film, two monks stumble upon the same Tree Demon to finish it once for all. There's also an 1997 Animated Adaptation of the first filmnote By Triangle Staff and Wang Film Productions, with a more kid-friendly feel. The original got a remake directed by Wilson Yip in 2011.