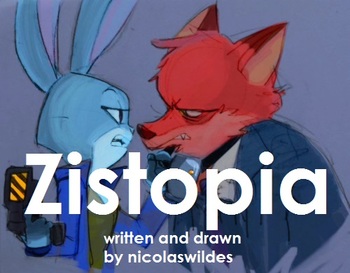 The Ever Sarcastic Author and Their Notes: Turns out that escaped convict you chased down and humiliated in front of an apartment of mice the other day is your only lead in solving a mystery. Good fuckin' luck.
Advertisement:

As some might know, Disney's Zootopia was originally going to be much, much darker. The Predators and the Prey were going to be segregated, with the Prey being upper and middle class citizens and the Predators being the lower class citizens. The Predators would be forced to wear shock collars that would zap them whenever they became "too emotional" in order to "correct" them. After test audiences found the story too grim to be able to enjoy the setting or the characters, the writers started over and eventually came up with the Zootopia we know and love today. Despite the love the movie received there were actually many who have found the original premise far more interesting, including a tumblr user under the penname Nicolas Wildes (yes, we know) who decided to take these thrown out ideas and make it into a fanfic/webcomic.

The story begins with Nick Wilde, who had just recently been arrested by none other than Lieutenant Judy Hopps not long ago for illegally taking collars off of his fellow Predators, (although only for a short period of time and for a small price) being offered a way out of prison. Help the woman who arrested him solve a mystery or remain behind bars. What happens next is a character-driven story of adventure.

You can get started at the masterlist

After a two-year hiatus beginning from November 2016, Word of God declared

it an Orphaned Series due to personal issues on November 2018, leaving behind a rough cut of the remainder of the story for the sake of closure.