Fanfic / Within And Without 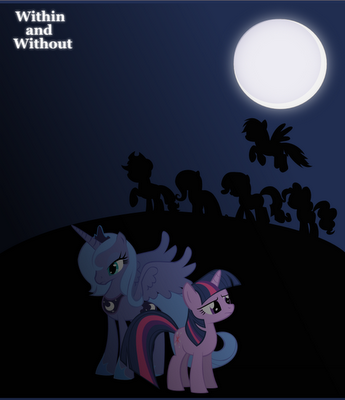 Whatever happened to the one-shot antagonists?

Twilight Sparkle and her friends are approached by Princess Luna, who presents them with a set of questions:

Did you ever stop to wonder what became of Trixie, Gilda and Blueblood after your encounters? What did these episodes truly mean to you? What role will they yet play in the lives of the Elements of Harmony?

Last, are these questions as relevant as the journey towards the answers? Who will benefit from seeking these answers - you, them, or I?

Originally written by Cloudy Skies in August-September 2011, Within and Without portrays the Mane Six confronting these and other issues in an lengthy, emotionally-driven quest that spans all of Equestria. It was among the first My Little Pony: Friendship Is Magic Fan Fics to blend well-written adventure narratives, character exploration and development, and shipping. It was recently revamped with new scenes and additional edits, all of which can be found here:

This My Little Pony: Friendship Is Magic fanfic contains examples of: