Fanfic / Where on Earth, Spies 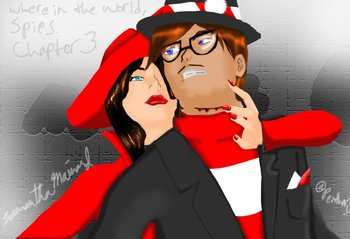 Waldo, a Tall, Dark, and Handsome Frenchman spy, works for the World Spy Organization, combatting the dastardly designs of an evil entity called VILE. Carmen, the sultry Russian adopted daughter of the original Carmen Sandiego, is the VILE agent Waldo has sworn to stop. She traverses the world in pursuit of artifacts to steal and has been eluding Waldo for a while by the time the story begins, their first meeting face-to-face.

Where on Earth, Spies is a Fan Fic written in Web Serial Novel format by Pentharis, published on DeviantArt. It's essentially a Mega Crossover Alternate Universe Spy Versus Spy Fic centered around the sexually charged antics of Carmen and Waldo. Their respective spy teams are comprised of a number of Darker and Edgier iconic advertizing mascots including Erin Esurance, her partner Erik, the GEICO Gecko (Martin), Progressive's Flo, the Taco Bell Dog (Carlos), and Allstate's Mayhem. All of them are interpreted by the author from their perspectives as spies, but they're kept in some line with their source material to fun effect. Maybe that Waldo wears a fedora.

It can be read starting here

, continuing backwards through that gallery folder.note DeviantArt isn't exactly made for hosting stories.