Fanfic / We Remember Everything 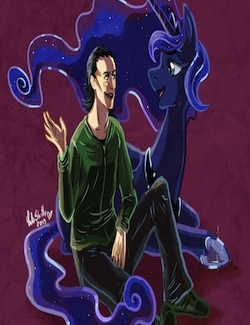 Two younger siblings who have been looked down upon by their respective societies, been overshadowed by their elder brother/sister, and have lashed out angrily. Now, together, what could possibly go wrong?

The first (though second in-universe) in the fanfiction family of stories made by Thunderscourge titled "The Path of the Pariah" taking place in the My Little Pony: Friendship is Magic universe of Equestria while also crossing over with the Marvel Cinematic Universe, in particular Thor. Taking place before the end of the third season of Friendship is Magic, the story begins with Loki's arrival on the planet after his defeat and fall from grace in Thor. Angry, alone, and confused by his new environment, Loki continues on with his rage and sadness until he comes across another who has walked the same path as him: Princess Luna.

Once the two meet and hash out their similarities and differences they find that settling their personal problems does not mean outside forces will not want to meddle: Chrysalis, Thanos, and even the mysterious Hela all continue to stir up the pot. During this all Luna takes on an apprentice, Trixie, to rival her sister's own student, unknowingly setting another soul down the same path of heartbreak she and Loki each survived.

Originally intended to be a oneshot, the story was expanded past its original plans to a single story arc, at which point it was extended again to a full blown storyline lasting eighty chapters and an epilogue. It continues to be occasionally updated with "non-canon" story bits that take place after the story's conclusion or are ideas that were unable to be used during the main story that take place in it.

Takes place after "Nothing Lasts Forever" (which is a canon supplement) and before "Equestria Was Merely a Setback" (which is of dubious canon).

Title comes from Five Finger Death Punch's song "Remember Everything", but is not a song-fic.

Has a character page that is in need of love.

We Remember Everything contains examples of: