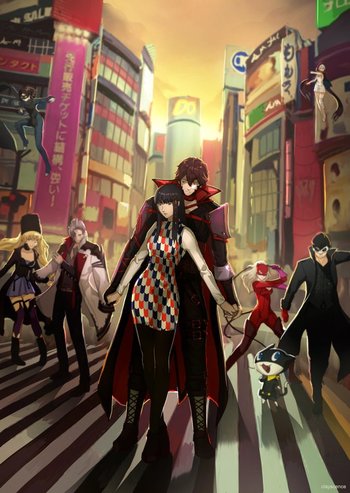 "It's coming. It's here." Said the female Revenant. Artwork by Vanette Kosman

is a Persona 5 and Code Vein crossover, with elements of Nioh, and Kakegurui. It is the sequel of Persona Vein.

It is part of the Akane no Mai series.

The former Phantom Thieves and new companions are having normal lives. One day later, time is reset back to 2018 that the cause of this is an anomalous force called the Yami Matter. With their powers regained, alongside the awakening of the Revenants in modern times, they set on a new adventure to handle the Yami Matters and new developments along the way.

With this fanfic being the first time Kanius handles the writing, it brings expanded concepts to the sequel.

Also, an upcoming consolidated story remake of both Persona Vein and this is coming in 2020. It will bring new changes/corrections relating to Persona 5 Royal and the completed Code Vein, alongside other things serving as a revise/final draft.

Archive On Our Own Link