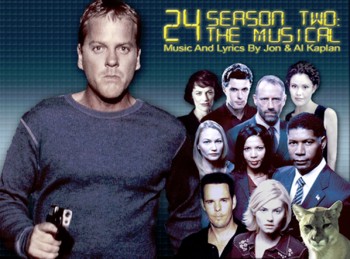 It's the longest day of his life... as a musical!
"Wake up Jack, get out of bed, Kimberly hates you, Teri is dead... A terrorist threat or a government plot, last time I paid the price with my wife! Dammit!"
— Jack Bauer, "Dammit! (The Longest Day of My Life)"

24: The Musical is a fan-made musical based on the second season of FOX's hit drama 24. The music and lyrics were written by Jon And Al Kaplan and it also features the 24 soundtrack music of Sean Callery. It parodies both the general elements of 24, as well as specifics from the show's second season, such as the hacking off of Marshall Goren's head and the infamous "trapped in a woods with a cougar" sequence. It can be found here

. A music video of the Kimberly Bauer song "Bring It On" can be found here

24: The Musical includes many of the familiar tropes of 24, as well as the following: