Fanfic / Touhou: The Iron of Yin and Yang 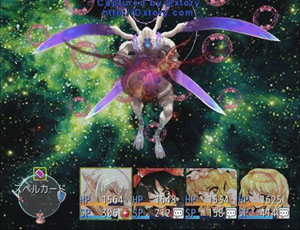 It is both a miracle of science and abomination against all that is right. Now if they could just do something about that watermark.
Advertisement:

aka Touhou Onmyoutetsu, a fan made 46 episode video series

, while those who don't are left wondering why an Elvaan keeps being paired with Gensokyo denizens in fan art.

The latest disturbance in Gensokyo has connected it to another fantasy gaming world, Vana'diel. Buront, a brash Elvaan paladin and unusual 2ch celebrity, is literally tossed into the thick of things. Landing at the Hakurei Shrine and unable to go back, he joins iRenmu Reimu in her job to quell the new monster-related problems. And general shenanigans with Touhou's large cast.

Things don't stay simple for long as the darker forces of both worlds begin to play off each other. Hostilities resurface across Gensokyo combined with outside threats from Vana'diel. As the new outbreak causes old tensions to resurface and the heroes band together to face them, they find themselves reexamining their ties, as well as the full consequences of solving the problem.

The videos are a parody playthrough of a game with no plans for release. Made with RPG Maker, the sprites and music are taken from many sources. Featured most prominently are the main characters' spell animations using Tasogare Frontier's fighting game sprites.

The series is currently untranslated and may have to stay that way.